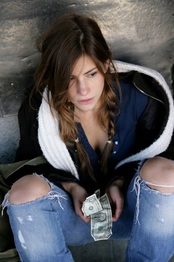 Cassandra Vogler developed the power of Flight as a teenager.  Her parents refused to accept that, and subjected her first to suppression therapy and then to clipping.  On her eighteenth birthday, Cassandra ran away from home and sought refuge at SPOON.  It didn't go very well at first, but she found friends who could help, opportunities for justice -- and even the hope that, someday, she might get her superpowers back.
"Clipped" 11-16-14 (Creative Jam)
Summary: A young woman walks into the SPOON base looking for help. Someone clipped her powers without her permission.
Characters: Groundhog, Cassandra, Granny Whammy, Danso, Hannah
Guest stars: Tumbler
Prompted by DW user dialecticdreamer and Origfic Bingo Card 9-29-14
Sponsored by Anthony & Shirley Barrette

"Soup Stuff" 2-22-15 (outside fishbowl)
Summary: After attending a meeting about what to do about clipping, Cassandra doesn't feel too great. Waverly encourages her to use art to vent some of her emotions.
Characters: Cassandra, Waverly
Guest stars: Groundhog
Prompted by Ladies Bingo Card 9-1-14
Sponsored by EdorFaus

"The Brightest Thing in the Day" 8-4-15
Follows "Neither Automatic Nor Inevitable"
Summary: Past and present stresses push her into some desperate measures. Groundhog finds out -- but his reaction is very different from previous experiences she has had. Competent dispatcher is competent.
Characters: Cassandra, Groundhog
Prompted by Anonymous, Hurt/Comfort Bingo Card 7-31-14 and Genprompt Bingo Card 6-10-15
Sponsored by Anthony & Shirley Barrette

"More Admirable than Conquest" 3-4-15 (fishbowl spillover)
Follows "Veranderings"
Summary: Cassandra has volunteered for babysitting when Yona is ready to give birth, and she gets a little more family action than she was expecting because of how everyone pulls together.
Characters: Cassandra, Groundhog, Yona
Guest stars: Miriel, Avner, Reuven, Portia, Bryony, Troy
Cameo appearance: Marsha Farley, Avram, Julia, Shay
Prompted by LJ user paantha and Villain Bingo Card 2-29-16
Sponsored by EdorFaus

Read about Emotional First Aid, which can be used to help reduce the damage caused by life's "hard knocks."

DW user Siliconshaman wrote the story "For Every Action..." which directly follows "Rise Above the Earth." Joan wishes for a different superpower than the one she got. "Safety First" is a direct sequel in which Joan talks with her moms about what happened.