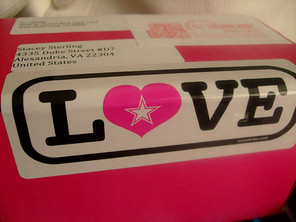 Perks, also called incentives, form a mainstay of the crowdfunding business model.  A perk is anything offered by a creator to an audience to reward or encourage certain types of behavior.  Most perks connect closely with a specific project so as to ensure their audience appeal, although some are more general.  Some types of perk only work with a particular mode of project, while others can apply to anything.  Let's take a look at some popular perks...

Advance access -- This covers all versions of letting certain people do something before everyone else gets to.  Examples include submitting prompts before a project session opens, or reading installments before they go public.  Similarly, prompters often get to see what is created from their prompts before it is posted publicly.  This is often a perk for regular participants, sometimes for donors.

Autographs -- Many small items such as books, bookmarks, albums, etc. can be autographed.  This is a popular perk for projects that produce hardcopy materials.

Badges -- Participants may be allowed to use a special icon, blog badge, or other image.  It often indicates something like the project title and type of participation, such as an icon for donors.

Customized content -- Something that is usually generic can be personalized.  A good example of this is taking a blank icon base and putting someone's name or a phrase on it.

Discounts -- Anything with a price on it can be discounted.  This often applies to preorders or to orders above a certain amount.  Some creators offer a discount to their regular supporters/donors, leaving standard prices for one-shot shoppers.  Subscription rates typically provide a better deal for longer terms than shorter terms.

Exclusive access -- This involves getting to see material that is not available to the general public.  It may be extra material for the project, but can also be something tangentially related, such as background items or essays. This type of perk is most often used for donors or subscribers.

Extra content -- More material gets released, such as an additional poem or background material like a timeline.  This can apply just to a qualifying donor or fan (such as going from one to two free icons), or it may be posted for everyone to enjoy (such as a bonus installment of a webserial).  A widespread example is a story that gets expanded every time someone does a certain thing such as donating, prompting, or linking.  Extra content is one of the most common and popular perks.

Extra session -- Enough participation activates a whole new round of a project.  This tends to be a high-end perk for established projects that are getting very busy.   Some divination projects will spark an extra session with a different divination tool.  The Poetry Fishbowl has an option for a mid-month session focused on a specific series.

Free shipping -- Material items cost money to mail from creator to recipient.  Waiving the cost of shipping is a popular perk for donors, for shoppers who spend a lot of money, and for holidays or other special occasion sales.  It can also be an effective competitive maneuver in a time when some suppliers will cheat people by artificially padding the shipping cost.

Guaranteed coverage -- The prompt/request WILL get finished and delivered, however long it takes, rather than catch-as-catch-can.  This is typically a perk for making a donation in a project that calls for prompts.  Most creators guarantee coverage for donors, but may leave themselves the option of skipping unpaid prompts if the session gets too busy.

Hardcopies -- This type of perk involves the creator sending items to audience members.  The hardcopies may be original art, printouts of literature, etc.  Sometimes these are handed out free as rewards, especially small things like bookmarks or ACEOs.  Other times they are offered for sale, and the perk aspect has to do with what variety of items will become available based on what level of audience interest.

Holding an item -- People may have the option of reserving something for while until they can afford to pay for it.  This most often applies to donors, frequent buyers, or high-end shoppers; but some projects offer it to regular participants or some other group.

Premium notification -- This allows some audience members to get information earlier than the general public does, or more information, or in a more convenient delivery method.  It usually applies to established projects with a strong fan base of people who really want to follow that creator's work, and creators who are busy enough to generate multiple levels of information.

Privileged participation -- The project may allow donors or other people to do more than other folks get to do.  A common example is varying the number of prompts that someone can leave; for instance, Sketch Fest lets anyone make up to 5 prompts, but supporters can make 15.

Publicity -- Crowdfunding naturally includes mentioning the names of active participants on both sides.  This perk covers everything from simply listing sponsor/promoter names to reviews or ad swaps.  Listing sponsors is nearly universal, though not quite every project does it.  Many projects have special perks for high levels of support and will make a bigger deal of announcing people who reach those levels.  Some creators will rather vigorously boost the signal for other projects or activities run by their fans/donors; this is often an unofficial perk rather than an official one.

Refined content -- Previously posted material gets revised in some way.  A good example is the Story Sketches project, with several ways to activate another round of work on a popular sketch.  Another is that weblit often gets revised if it proves popular enough to issue in hardcopy, a decision often based on audience interest.  Some projects that generate short fiction also have an option for revising the most popular stories.

Reprint rights -- Some projects produce material that is easy to repost or otherwise share.  Icons are usually intended for use by the person who prompts and/or sponsors them.  Flash fiction, poems, and other smallish items may be made available for their sponsors to repost personally in addition to the public posting on the project's main site.  (This is distinct from use rights, below, in that it does not include changing the original material.)

Supplemental goodies -- Occasionally, creators issue prizes are that are things not directly related to a given project.  This allows the audience to enjoy the creator's talent in general, such as with a free book or a type of art that isn't part of the main project.  One perk for the Story Sketches project (which normally involves illustrating scenes) is a free icon.

Theme suggestion -- Similar to prompts, a theme suggestion sets the tone for an entire session or subproject.  This most often applies to recurring projects or to creators who have a lot of different projects.  It's typically a perk for donors or long-term participants, because it can have a huge impact.

Upgrades -- The base content gets elaborated in some way.  For instance, art may go from line art to grayscale to color, offer access to a higher-resolution image, or produce a larger size art of original.  Icon Day by Djinni has several of these including color and size upgrades.  In fiction, a short story may be extended into a longer story.

Use rights -- Some projects lend themselves well to sharing material produced as part of the project such that other people can use it for their own creative efforts.  A photographer might crowdfund a trip to shoot something, and then release a package of stock photos to donors, which they could use for book covers, LOL bases, art inspiration, or whatever.  (This is distinct from reprint rights, above, in that it includes permission to change the original material.)

Voting -- Participating in a project can earn voting rights to influence it. Some creators post polls that are only accessible to donors or regular participants.  "Flight of the Godkin Griffin" by haikujaguar allowed donors vote on plot directions.  Other creators let everyone vote in a given poll, but use checkboxes rather than radio buttons and award extra votes to certain groups.  The Poetry Fishbowl project does this for selecting monthly themes: anyone can get a single vote, prompters get two votes, and donors get three votes.

Worldbuilding -- Some projects lend themselves well to collaboration, and extend that option as a perk.  Donors or regular participants may get to name a character, establish a town, or designate some other feature of a popular setting.  This type of perk tends to work best with creators who have a bunch of diverse settings active, with a large and lively audience full of people interested in supporting different things.  In some applications it can help to indicate which characters, settings, etc. are more popular.

Year-end gifts -- Many creators do something nice for their audience at the end of the year (for Christmas, Yule, Chanukah, etc.).  Popular examples include holiday cards, bookmarks, ACEOs, and so forth.  Some creators use recipients' birthdays instead of a year-end holiday as a time to thank people for their support and participation.  Another practice involves sending out a small item to all participants from that year, with more elaborate goodies for regular participants and/or high-end supporters.


This is a revised version of an article I previously posted over on the LiveJournal community Crowdfunding on 9/5/11.