Is Crowdfunding Right for Your Project? 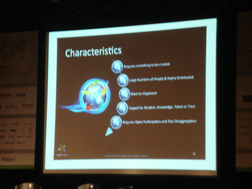 It seems to me that some projects might be better suited to crowdfunding than others...but I don't know how to tell what kinds of projects would work well and what kinds wouldn't work well.

There are a lot of different factors that could influence a project's suitability.  While planning your project, it helps to outline its features as best you can and compare those to the set of things that crowdfunding does well vs. what other business models do well.  Then choose the closest match.


* Does this project already look like, or could it be made to resemble, an existing crowdfunding model?

It's easier to launch a new project in a model that crowdfunding folks will already recognize.  If a project more closely resembles mainstream things, or is so new that it's not like anything else, the setup will be harder.

* How much interaction does the project involve?

Projects that require or benefit from more interaction between creator and audience are better suited to crowdfunding than those that thrive as solo work.

* Is the material monolithic or expansive?

Monolithic projects can be challenging to do as crowdfunding; they're harder to divide into small sections for phased contributions, or to spin off bits for perks.  Projects that expand or divide conveniently are better suited to the crowdfunding model.

* Does the material have a potentially enormous audience, or a smaller one?

If it's close to mainstream material and will appeal to that audience, a mainstream publisher will probably pay more than could be raised via crowdfunding.  But if it's an odd little project appealing to a niche market, the mainstream probably won't touch it while the underserved audience could be all over it in crowdfunding.

* Does the project and/or creator already have a fanbase?

If not, crowdfunding is iffy because the audience would have to be built from scratch, which is a lot of work.  But if there's already an audience in place and the mainstream markets aren't keen on the project, just go direct to the fans.  Good projects pitched to an extant fanbase usually thrive.

Creative projects such as writing, art, music, etc. do well in the branch we call "cyberfunded creativity."  Crowdfunding as a wider business model can also be used to start a business, fund a trip, or do all kinds of other things -- but the venues are different and so are some of the strategies.  But once you get outside the creative sphere, opportunities may be broader in mainstream options, not just for finance but other support as well.  The mainstream is a lot more enthusiastic about businesses than books.

Most crowdfunding these days takes place online, and cyberfunded creativity evolved specifically in this dimension.  Things like text, images, and sounds are easily shared online so they make good project types for crowdfunding.  If it's something that can't readily be transmitted -- the flavor of a recipe, the fragrance of essential oils, the texture of fabric -- that makes attracting supporters more difficult.  Some other business model might work better for projects that rely on realspace appreciation.

* Can there be copies of the material, or only originals?

Crowdfunding works best with things that can be shared widely.  A story or song exists in as many copies as desired; a painting can be rendered as prints.  But if you're making ceramic altar goods, each one is an original that you have to create by hand.  That's less suited for crowdfunding.

* Does this project actually require money?

Crowdfunding is great if you need cash.  But if you don't -- and I've heard a couple folks say that about their projects -- then it may be more bother than it's worth.

* If it requires money, how much?

A low entry threshold makes it easier to build a big audience.  A low goal is more likely to reach fulfillment.  Such projects tend to work well in crowdfunding.  This business model is really all about pooling lots of little contributions to accomplish something that's difficult or impossible for individuals to do.  If it costs more to buy in, fewer people will be able to afford it; and higher goals succeed more rarely.  Such projects may require the deep pockets of a conventional publisher.


This article was originally published on LiveJournal and on Dreamwidth 6/27/12.

Crowdfunding: When and How to Use It

Let me tell you about my ambitions, and why they don't include Kickstarter (for now)

When to Use Crowdfunding