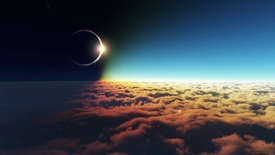 "Slowly exploring space, humanity discovered remnants of an alien civilization: jump gates that opened the galaxy to colonists.  Today hundreds of planets hold human settlers, some adapted to fit their new homes.  When one of those worlds calls out for help, we are the ones who come.  I am the Core of the hiveship Omphalos.  These are the members of my crew.  Together we are the Blueshift Troupers."

Humanity's first efforts to explore the stars used sublight methods such as generation ships.  This created a scattering of colonies that soon lost touch with each other and developed independently.  The discovery of alien technology made it possible to expand much faster and farther.  Some of the worlds began to reconnect, while others remained lost or at least obscure. However, the gate system is ancient and quirky; occasionally it sends people on a one-way trip or modifies them without warning.

Nobody fully understands how the alien biotech works, although people have learned to work with it.  Organisms have been bred, gengineered, and/or biosculpted into tools, weapons, and other desired purposes.  Certain people have a strong affinity or aversion to this technology. Jumptech has greatly expanded and improved human life, including the possibility of adaptations to suit new planetary challenges.  Most injuries or illnesses can be fixed easily with the right equipment, although some remain out of reach.  The level of available technology varies widely, though, and individual planets range from jump level right down to stone age.

Pharos is the name of the major jump gate hub.  It was the second gate discovered, as an outlying gate led there.  Pharos is located on the Annula, a ring of cosmopolitan worlds around the outside of the galactic core.  Annular worlds have advanced technology with constant traffic to and fro.  They hold a fairly mixed population and tolerant culture second only to the spaceborn.

Around the Annula is the Laceum.  The Lacer worlds are a loose network of planets somewhat farther out, which get periodic traffic.  They are familiar with the wider galactic community but have varying degrees of involvement in it.  The cities tend to be more cosmopolitan, whereas smaller settlements and rural areas lean more isolationist.  Lacer worlds usually have a dominant race with a smattering of others.  The age and developmental level of the planets varies more; some "lost" worlds have been rediscovered here.

Beyond the Laceum lies the Fimbria, a ragged edge of planets that are connected to few others.  Some of them see occasional traffic, while others get visited only in an emergency.  A majority of the "lost" worlds have been rediscovered here.  Fimbrial planets have the widest range of technological development, but the average level is considerably lower.  Each planet has a dominant race -- rarely, two or more distinct races, of which one usually holds power over the rest.  They tend to be isolationist, often to the point of xenophobia.


Read more about the jump gates.

A hiveship is a living starship based on biotech, its organic alien structure enhanced by components of inorganic human equipment.  The ship consists of several individual modules united in infancy, much the way distinct organs make up a human body.  Each part has its own consciousness, with a shared memory and communal awareness.  Hiveships can form a bond with a human crew, and most choose to do so as they tend to be lonely without a crew. Omphalos  is the carrier of the human members of the Blueshift Troupers -- not merely transport, but their home and part of their family.

Core, the internal organizer, is shy and rarely comes out.  Core narrates the opening sequence of the show and the core memory (analogous to a captain's log).  Helm is the navigator, usually in charge on the bridge, calm and businesslike.  Helm sometimes narrates bridge scenes.  Guard is security, the one who handles internal and external equipment for defense and offense, with a tough demeanor.  Healer oversees the crew's health including metamorphosis, and is gentle but a little cool.  Engine deals with propulsion and repairs, mainly in the engine room, with an energetic and excitable style.  Life monitors life support and maintains a warm relationship with the crew, ambient throughout the ship as well as the life support section of engineering.  Analyst processes sensory information and scientific matters, with a curious and intellectual air.

The human crew comprises a team of shapeshifters who can change to match the prevailing race on each planet they visit.  Each member has their own specialty, but they are also cross-trained so that at least two people can cover all the crucial roles in the team.  They work together to solve problems of planetary scale.

"The Pharos Gate"
"The Stars So Far and Near"
"Like Jewels on a Ring"
"Dreams into Space"
"The Open Gate"
"Toward Concordance"
"The Book of Avory"
"Holding the Line"
"You Should Go"
"Locked In"
"Form Follows Function"
"Finding the Lotus Flower"
"Times of Hardship and Ease"
"A Common Bond of Principle" Part 1, Part 2
"His Family's His Crew"
"The Long Splice"
"Sequoia's Children"
"The Woods Women"
"The Liberty Stones"
"What the Words Would Have Been"
"Proving a Negative"
"A Glitch in the System"
"A Disease of Ignorance"
"Passage Rites and Rights of Passage"​
​
By Other Authors
"Finding the God in the Gate" story by DW user zeeth_kyrah
"In the Market" vignette by DW user dialecticdreamer

Read the first concept post and its comments on Dreamwidth or on LiveJournal.

Read the development post and its comments on Dreamwidth or on LiveJournal.