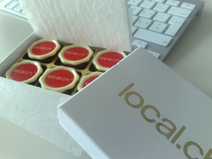 A majority of crowdfunded projects include "perks" or incentives that reward participants for doing things the creator finds valuable.  This encourages people do more of that.  Some perks apply to one specific person in recognition of their activity.  Other perks activate when a collective goal is reached, and then become available to a wider group or to the public in general.  Let's take a look at some things which creators choose to reward and encourage.

Banners and ads.  Images on other websites are ideal for driving traffic to a project, so placing them can earn perks.  This is most often done between creators, but sometimes other audience members will post an image for their favorite project on their website.  Sometimes a project -- especially one heavy in art, such as webcomics -- will have a whole extra page with banners, buttons, etc. that people can use to promote it.

Baseline interaction.  Most crowdfunded projects offer some content as a free sample; this is often generated and posted as part of the baseline interaction.  This category covers all the goodies that always  appear in a project session, like the way that the Poetry Fishbowl always posts one free poem or Story Sketches begins with a rough sketch.  It is generally framed as a thank-you to the audience just for being there.  In other words, when you pay attention, this is what you buy with it.

Comments.  Many venues, such as LiveJournal and YouTube, allow audience members to make remarks based on someone else's post.  Comments indicate overall interest and often contain precious details, thus making it easier for creators to deliver more of what people like the most.  Popular perks for comments include revising or expanding an item that gets a lot of attention, or setting a threshold number of comments that will activate a public perk such as bonus content.

Creative content.  Some collective projects (such as Sketch Fest, or the Muse Fusions for Torn World) reward creators for claiming prompts and creating art, literature, or other material as a result.  Creating material, and posting it to the site, may earn different perks for each step.  Additionally, some creators reward their audience for generating fanart, fanfic, etc. relating to their project(s).  That can be a great way to encourage cross-traffic between different projects, and indeed, some projects (both one-shots like an April Fool swap, and long-term ones like Story Sketches) have been designed with that exchange in mind.  Publicity is the baseline perk for this, as creators almost always link to the content and name the contributor; but some creators offer more.

Early participation.  This includes such things as preorders of albums or books, posting prompts as soon as a prompt call appears, etc.  It can be done as a time window (as for preorders) or simply by awarding a perk to the first X responder(s).  It's a good way of teaching people to respond quickly to project updates.  For window periods like preorders, the perk is often a discount or extra content.  For first responders, it's frequently an upgrade such as a larger picture or longer literature.

Editorial input.  In crowdfunding, the audience serves in the editorial role, and some creators capitalize on this and reward it.  Editorial input includes such things as spotting typos in literature or missing shadows in a webcomic.  Creators who welcome editorial input customarily go back and revise their work based on it, although they may not use all the suggestions; so the baseline for this is revision.  Other perks start with recognition (which can be valuable to folks trying to build editorial credits) and then go into such areas as bonus content or upgrades.  LiveJournal user kajones_writing offers a choice of perks for finding typos: character adoptions, a prompted story, or bonus material.

Favoriting.  This can work either in a public venue that allows users to mark favorite items (such as YouTube) or on a private website with a favorites feature (such as StarDancer).  In a public venue, favoriting an item helps to attract attention to the project.  On a private website, it's more a way for the creator to tell what's the most popular.  Perks may involve revision on the most popular item, expansions of a popular series, or a threshold of total favorites that activates a general perk such as bonus content.

Feedback.  In addition to the several specific types of feedback detailed in this overview, any kind of author/audience interaction may also count.  For instance, there are email messages and other backchannel contact options, face-to-face conversations, etc.  These may have formal perks but often have informal ones, where the creator will spontaneously bestow whatever seems suitable at the time.

Friending.  Any venue that allows people to forge connections (like friending on LiveJournal, liking on Facebook, etc.) for networking purposes will be more useful to projects if they can maximize their contacts.  Typical perks here are bonus content or extra content; it's almost always something that expands the popular project.

Linkbacks.  This covers all versions of posting a link to a project, whether on the same service, a different service, a personal website, etc.  Linkbacks drive traffic to a project, boosting its audience and potentially its income.  So creators seeking to widen their exposure often reward linkbacks.  Perks can be individual, going to people who link frequently; or collective, based on a threshold.  Sometimes a creator will post small bits of content as individual linkbacks appear.

Money.  If only one action will earn perks, it's usually for sending money to the creator.  Almost all crowdfunded projects offer perks to donors.  Several subtypes are worth mentioning:
* General donations.  Usually collective with broad benefits, general donations support the project as a whole.  Sometimes a person's donations are added up with individual threshold perks.  Also, general donations often feed into a fund that the audience can later vote to apply toward specific items, as in the fiction project by LiveJournal user kajones_writing.
* Sponsorships.  Usually individual with private benefits, sponsorship focuses on one specific item.  Perks are often targeted to what was sponsored, such as reprint rights.  However, it's also customary for sponsored items to be published online, so that everyone gets to see them.  The Poetry Fishbowl is a good example of these aspects.
* Subscriptions.  Usually individual with private benefits, subscription perks are almost always targeted to the subscription topic.  For instance, Torn World subscriptions come with a free character adoption.

New participants.  This may involve giving someone a perk the first time they do something (such as making a donation or posting a prompt), which encourages people to get more involved in a project.  It may also reward the whole audience when someone new becomes an active participant, which encourages everyone to promote the project in hopes of reaching new people.  Newbie perks are often extras (such as the Poetry Fishbowl posting another free poem if there's a new donor or prompter) or discounts (such as a cheaper subscription rate the first time).

Prompts.  This relates to all the ways in which a creator may call for prompts to inspire new material.  Other forms of inspiration also fall into this category; the creator may not ask for a story or image idea, but for some random thing such as a number or color, etc.  A standard perk for prompts is getting to see what was inspired thereby, even if it doesn't get sponsored for public viewing.

Rating.  Some websites, such as Web Fiction Guide, allow users to rate entries for quality (usually a four or five star scale).  The more people have rated a project, and the higher its score, the easier it is to attract new audience members.  Creators may reward individual fans for rating a project, but more often, a certain number of ratings will activate a general reward such as bonus content or faster posting of new installments.

Reaching a goal.  A threshold may be set for amount of donations, number of comments, new participants, etc.  The person whose contribution puts the total over that threshold may earn a perk for doing so.

Regularity.  Many creators appreciate audience members who stick around, and certain types of projects benefit from repeat participation by familiar people.  Regular participation may earn perks such as advance access to information or posting, exclusive access to material, or discounted prices.

Referrals.  If someone mentions who sent them to a project, that's valuable information.  Numerous creators offer a perk to the people who drive traffic to the project.  Popular perks here include exclusive content and upgrades.

Reviews.  Some websites, such as Web Fiction Guide, allow users to post reviews of a project.  People may also post reviews in a community such as the LiveJournal community Crowdfunding, or on a personal blog.  The more and better reviews that a project has, the easier it is to attract new audience members.  Creators may reward an individual reviewer, often with a signed copy of new releases or other swag.  A threshold number of reviews may activate a general perk such as bonus content.

Top slots.  This may be the highest donor, the most active commenter, etc. but some creators have a special perk for the person who comes out on top in some way.  Typical perks for this are premium information and exclusive content.  Similarly the perk may apply to an item rather than a person, such as the one which gets the most linkbacks or tips.  Story Sketches has several perks of this type, like a free round of work on the sketch that brings the most tips and the sketch that gets the most linkbacks.

Traffic.  The target may focus on page hits or some other tally indicating how many people are accessing the project.  Different creators home in on different angles of promotion, and set their perks accordingly.  Higher traffic means more attention, which tends to boost income.  Typically reaching a certain threshold of traffic will activate a public perk, such as upgrades or expansions of current material.

Voting in polls.  When creators post a really important poll for audience input, they may offer incentives to get as many people's opinions as possible.  Sometimes this is a threshold goal ("If at least 25 people vote, I'll post this poem.") and other times it's a piece-by-piece offer ("For every person who votes, I will scan another pencil sketch.")

Voting for a project.  This applies to ongoing "best of" lists such as Top Web Fiction and Top Web Comics.  Offering the audience a free pinup image of the characters can launch a comic toward the top, where it gets even more attention.


This article began as a post on the LiveJournal community Crowdfunding on 9/12/11.