The Shared World as Serial Literature 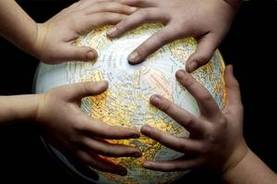 A shared world is a setting created by multiple contributors working together.  It may include poetry, fiction, artwork, worldbuilding descriptions, and/or whatever else people feel inspired to make.  The Cthulhu Mythos is one famous example, and it includes poetry.  While the basic concept has existed for many years, cyberspace makes it much easier to create and share material collectively.  So shared worlds are thriving online.

This is good news for poetry.  Plenty of shared worlds allow poetry as a contribution.  Poems can be short and easy to write, making it feasible to build up a lot of material quickly, showing different parts of a world and its people.  They can also be longer and more detailed, which adds to the depth.  Furthermore, collaborative work facilitates inspiration, allowing items to "chain" together as one person's creation inspires another.  Poems may cluster together around a given character, location, or event in the shared world.  When you add up all the different pieces, the poems created within the project then function as a series; they may share a common timeline as well as setting and overall theme.

Torn World is a science fantasy shared world launched by Ellen Million, with a large number of other contributors.  (New to this project?  We recommend that you start here for readers or start here for contributors.)  It features poetry, fiction, artwork, and a lot of worldbuilding articles all hosted on a custom website.  Some of the poems relate events that are anchored to a specific date in the timeline.  Others don't have a date, existing as cultural material within the setting itself.  If you look on the Poetry page, you can see all the poems listed by date of publication.  Visit the Timeline to find all the poems and stories listed in chronological order within the setting.

The Silk Road Allies is a smaller shared world project that grew between three creators, and it's alternate history about Italy and China forming an alliance.  So far it spans about a thousand years of history.  The poetic forms draw from Italian and Chinese traditions.  Many of the poems focus on specific turning points in history and how the alliance changed the way they played out.  If you look on the Poetry page, you can see a list of poems in the series with links to those published online.

A key aspect that distinguishes shared worlds is the use of collaboration.  Because poetry isn't very popular in the mainstream right now, there are few opportunities for poets to work together, receive detailed feedback, and hone their craft.  Shared worlds often include mechanisms for encouraging contributors to team up on individual projects.  They may have contests or challenges that require teamwork, or prompt calls when anyone can put out ideas for someone else to write/draw.  It's also common for one thing to inspire another, such as going from a forum discussion to a picture to a story and a poem.  Two poets might collaborate to write a merged poem, each of them portraying the perspective of a different character.  There are many possibilities.

Shared worlds also need to consider the issue of canon -- that is, what counts as part of the official content.  Most shared worlds have one or more people designated to make such rulings; often they have a set of guidelines for canon qualification.  The details vary, though.  Torn World has a Canon Board.  The Silk Road Allies is less formal and simply involves discussion among the three members, all of whom have different relevant credentials.  Some shared worlds also have a separate listing for non-canon materials, things inspired by the same setting but with some parts that don't entirely match established features.  This correlates to a similar issue in serial poetry generally -- the need to maintain consistency over a set of poems, often quite long, so that errors don't creep in to distract readers from the storyline.

What do you like about shared worlds?
How do you think poetry contributes to the shared world phenomenon, as contrasted with other formats such as fiction and art?

"The Lost and Found Legion" belongs to the shared world project The Silk Road Allies.  This project tells of a world in which China and Italy became close friends.  It started with a prompt that I left in a Poetry for the Masses session by LiveJournal user Thesilentpoet.  From there it grew to include poetry by myself and LiveJournal user marina_bonomi.  Each of us has different relevant experience to add to this project.

This poem came out of the July 3, 2012 Poetry Fishbowl.  It was sponsored by Marina Bonomi.  It reveals the roots of the alliance.  This poem originally appeared on LiveJournal.  You can read more about the Roman Empire, Roman legions, the lost legion, and Emperor Nerva online.

"The Girl Who Wanted Too Much" belongs to the science fantasy shared world Torn World.  This project explores a place that was broken and is slowly mending itself.  As the scattered shards of time rejoin, they leave behind dangerous remnants such as time crystals.  The people in Torn World learn how to deal with these challenges, but that's a gradual process and it has some casualties along the way.  As you read poems from this setting, you can see how the different cultures evolve over time.

This poem came out of the June 5, 2012 Poetry Fishbowl.  It was sponsored by Anthony and Shirley Barrette.  The characters belong to the Duurludirj culture, a race of tough seafarers most of whom are dwarf-sized.  This poem explores what happens when a time barrier falls early in their history, allowing access to new territory -- and new hazards.  You can read the original post on Torn World.

The Beauty of the Shared Universe

Collaboration -- Working with a Writing Partner

What You Need to Know about Shared Worlds

Writing in a Shared Universe


This article was originally posted to the Dreamwidth community Poetree on 10/22/12.