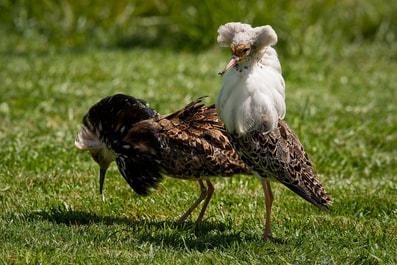 The Fifers are a race of birdlike aliens who have five genders and a polyamorous society.  The aleph males are assertive and territorial, with large dark ruffs and bright plumage.  The beth males are easygoing and live between the territories of the alephs; they have smaller pale ruffs.  The faeder males are gentle and won't tolerate alephs or beths who are too rough, but live inside an aleph's territory; they look much like females, with drab plumage.  The modor females enjoy topping other females, have low interest in males, but will follow along if their 'special friend' gimel chooses to mate.  The gimel females enjoy bottoming to other females, but are also the most interested in males and typically do the mate selection, bringing along any 'special friend' modor(s) they may have.  The most stable and productive family structure incorporates all five.

Humans have begun interacting with the Fifers.  In the process, some humans find that the five-way gender and family structure has some appeal for them too.  This is improving relations between the species.  This series began with the April 1, 2014 fishbowl.

"No Yesterdays on the Road" 11-21-17
Prompted by DW users bairnsidhe, mama_kestrel, readera, zianuray, and rix_scaedu and  Space and Time Bingo "Space" Card 10-31-17
Sponsored by DW user janetmiles and sponsor Cody