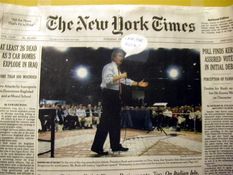 This page collects interviews and guest posts featuring Elizabeth Barrette in relation to the book Prismatica: Science Fiction Poetry Spanning the Spectrum.  For now it will feature brief excerpts with links, so as to give the host sites maximum benefit from the features.  Later on, I hope to reprint some of the features here.

"For Better or Verse: Writing Short Fiction and Poetry"
Guest Post by Elizabeth Barrette on An Englishman in New Jersey by Jon Gibbs

As a writer, I cover a lot of ground. I span many different topics and fields including speculative fiction, nature studies, and alternative spirituality. I also write nonfiction, fiction, and poetry. So when Jon suggested I do a guest post on the difference between writing a short story and a poem, I thought, "Hey, that sounds like fun!"
First, when I get an idea, I have to decide what format suits it best. If the concept itself packs the most punch, then it usually winds up as poetry. If the development of process and detail carries the weight, then it turns into fiction. Length isn't necessarily the determining factor. I write plenty of long poems, and sometimes I write short-short stories. So some of my longest poems actually have a word count higher than my shortest stories.

Read the rest of "For Better or Verse" on An Englishman in New Jersey.

"Guest Post: Science Fiction Poetry vs. Mainstream Poetry"
by Elizabeth Barrette on Grasping for the Wind

Most people don’t pay much attention to poetry today, because it’s not a big part of life in conventional society. The science fiction subculture, however, takes a different approach — and that’s where things get interesting.

In the mainstream, poetry has largely faded from public view. The poets in academic circles write mainly for each other, in a style that doesn’t appeal much to general audiences. Its focus is primarily inward. The popular manifestations of verse — such as pop songs and advertising jingles — aren’t thought of as poetry per se.

In science fiction, poetry doesn’t just look inward. It looks around and ahead. SF poets often draw inspiration from the latest scientific discoveries, whatever field they favor, encouraging us to think about what we’re doing.

on Grasping for the Wind.