Crowdfunding for Readers: The Power of Patronage 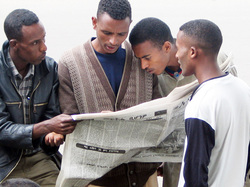 Anna Harte invited me to make a guest post on ErgoFiction about crowdfunding and patronage.  For those of you who don't know me, I'm Elizabeth Barrette, or Ysabetwordsmith on LiveJournal and various other services.  I've been involved in crowdfunding for some years; I coined the term "cyberfunded creativity" back in 2008 to describe direct interactive sales between creators and patrons, then came across the broader "crowdfunding" movement later.  I'm a writer, editor, and reviewer across multiple fields; and in crowdfunding I am both a creator and a patron.  While my most successful cyberfunded project is my monthly Poetry Fishbowl, I have also done fiction including the Torn World Muse Fusion.  I'm grateful for this opportunity to connect with folks in a venue that focuses on webfiction, or weblit.  Let's take a look at what crowdfunding means to you and me.


The Benefits of Patronage

Many weblit projects offer readers an opportunity to contribute.  Popular crowdfunding options include a donation button for tips, a subscription or membership, the chance to sponsor individual pieces, and so forth.  People who do this are usually called patrons, sponsors, or donors.  Once upon a time, only rich people got to be patrons, because they did it by supporting a whole artist.  Now anybody can be a patron, because crowdfunding lets audiences pool their resources  to support a creative person collectively by funding individual projects.  Patronage gives you access to all kinds of goodies...

How to Be a Great Patron

Patrons make cyberfunded creativity come alive.  Your interest, enthusiasm, and support determine which projects succeed and which fail.  That's a lot of power, so use it wisely.  Not all of it comes down to cash, either; many patrons use a combination of techniques to show their approval.  Note that different writers don't all value the types of support in the same order of importance, so watch for clues indicating what your favorite writer loves best.

"1000 True Fans"
"Crowdfunding and Personal Causes"
"How to Support Your Favorite Author"
"Salting the Mine/Priming the Pump"
"The Stories That Editors Won't Buy"
"Tanja Aitamurto on crowdfunding and the future of narrative journalism"
"What Is Cyberfunded Creativity?"

My activities in cyberfunded creativity spread very widely.  I'm interested in promoting the whole crowdfunding concept as a new business model.  So I'm both a patron and a creator.  I've also egged a number of friends into trying a crowdfunded project, sometimes with spectacular results.  I like crowdfunding because of the high interaction between creator and audience -- but also because it encourages crosstalk among audience members.


My Experiences as a Patron

I've contributed varying amounts to artists and writers, and even to a movie.  My partner and I are in the credits of Sita Sings the Blues.  Some other projects I have donated to include "The Aphorisms of Kherishdar," "Tod's Free Icon Days," and a painting for Haiti relief.  It gives me a great sense of satisfaction to shape what gets published, to support what I cherish.

When I can't afford to donate, I promote.  I'm on Web Fiction Guide as Ysabetwordsmith; I also post a lot of links on my LiveJournal, "The Wordsmith's Forge."  There are people using me as a newsfeed for what to read, because they like what I recommend.  Patronage is my way of adding my voice to others, whether I do it with money or with words.

I'm always watching for links and recommendations to good weblit, especially crowdfunded projects.  The Livejournal community Crowdfunding and the Dreamwidth community Crowdfunding are good places to watch for these.  I also have friends who post about what they've discovered or read recently.  If you build up a good network of folks who like cyberfunded creativity, once one of you points out a hot new project, it tends to echo through some or all of the others (depending how close your tastes are).  To the creators, this is very valuable word-of-mouth promotion.  For readers, it's a fun way to share cool weblit with friends.

Another thing I do is to examine crowdfunding models and techniques.  I look at the projects themselves, but I also read posts where the author talks about how a project works and what it should accomplish.  When I do this, I can identify what creators want.  Then I compare it to what I can deliver as a patron.


My Experiences as a Creator

As a creator, I love my patrons.  They give me inspiration, guidance, and feedback.  They have taken me to places I would probably never have discovered on my own.  They give me opportunities to stretch my talents in new and interesting directions.

Working with patrons allows me to tap into a whole new level of synchronicity and creativity, as when several folks give me prompts that land in the same setting but not the same story.  That has happened once or twice in Torn World and repeatedly in my Poetry Fishbowls.  My patrons pick storylines to continue and favorite characters or settings to feature.  When multiple people get attached to the same material, it grows accordingly.  I find that this helps me figure out which things will have wider appeal, beyond my immediate audience.

I also like the way that a dedicated patron or two can inspire a matched set of material on an obscure topic.  For example, I have a batch of Minoan poems because one patron was really into Minoan history.  I'm currently running a series of poems about an origami mage.  (See the Serial Poetry page for these.)  I've got recurring characters in Torn World who developed out of audience prompts.  Those are big impacts.  When there's not much Minoan poetry in the world, several new ones make a difference.  Consider some of your favorite topics as a reader -- are any of them rare enough that you could make a meaningful contribution to the total by prompting more people to feature them?

In terms of donations, my results have varied.  I've sold or bartered several pieces of fiction and poetry over on Torn World.  I post photographs on "The Wordsmith's Forge" and people can tip me for extra photos.  By far the most successful project so far has been the monthly Poetry Fishbowl, also in "The Wordsmith's Forge."  It's interesting to discover what people like and which kind of crowdfunding model they respond to the best.

Donations also make up a vital part of my household income, so I really  appreciate every penny.  A couple bucks from someone I know is broke will mean a lot to me.  There are regulars who buy things again and again.  I even have some k-fans who spend $100+ a year with me.  You bet I pay attention to what my patrons like!

But it's more than that.  I get to know my patrons and make friends with them.  They believe in what I do.  They share joy in my success.  And you know what?  Those particular bits are in my definition of family.  We've got room for more.  Do you?


This article originally appeared in ErgoFiction  in 2010.  It has been revised and reprinted, first as posts (Part 1, Part 2) on the LiveJournal community Crowdfunding and then here.