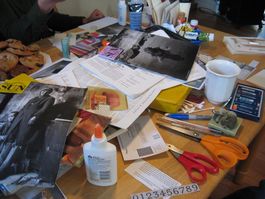 Cyberfunded creativity includes a wide range of activities and products.  These group together into some broad categories of crowdfunding.  You may find it useful to browse the options if you're thinking about creating a project of your own or looking for projects to follow.  Let's take a look at some popular types of content that appear in crowdfunded projects.

Art includes a wide range of visual media such as abstracts, character portraits, crowdsourced paintings, icons, and sketches, usually in two dimensions.  Free Icon Day is a popular kind of project where an artist will offer tiny pictures for free; often these improve with donations, such as from black-and-white to color. Tod Wills (LJ user djinni) runs one of the most famous of the icon day projects.  A crowdsourced painting is produced by one artist but with input (for subjects, color choices, etc.) from multiple audience members.  Artists may post sample images and let the audience pay if they want to see more.  Another common technique involves posting a big batch of sketches and letting the audience decide which ones to paint.  Story Sketches is particularly noteworthy in that it draws inspiration from literature, especially as crowdfunding writers often submit scenes to be illustrated, and audience comments or donations activate further refinement of a sketch.

Crafts deal with objects which may be practical or decorative, often both, and usually in three dimensions.  Examples include ceramics, jewelry, and knitting.  Here the crafters typically ask the audience which colors, patterns, or design motifs they like best.  Later they get a chance to buy items as each is finished.  Sketch Fest sometimes has participants who work in clay or other materials beyond the usual pencil or paint.

Divination seeks to reveal hidden aspects of the future, present, or past.  This type of activity is not well supported in the mainstream, but divination projects can become wildly popular in the crowdfunding circles, sometimes drawing hundreds of requests in a day.  A popular example is a One Card Draw, in which the reader answers a single question with a single card (or other item); perks often offer a more extensive reading.  These may be done with Tarot cards, runes, crystals, or any other divinatory tool.  A unique deck designed by the reader is especially attractive; for instance, LJ user wrenstarling works with her own Bird Oracle.  There are also psychic sessions, scrying, and other types of divination besides randomly drawn objects such as cards.

Performance is more of a process than a product, although it may be recorded and sold on albums or other media.  Examples include dance, music, and singing.  The Dance Challenge is a notable project by LJ user mikalay in which audience members submit songs and the dancer performs to a short excerpt of each; then the most popular song gets danced in full.

Photography comprises visual images taken from life.  They may be left plain or enhanced in various ways.  A typical project begins with sample photos, and audience members can donate to get more.  Here's an example where I posted some photos of snow and ice that were sponsored.  Some artists who work with photomanipulation ask for audience input about the style of manipulation or post different versions and ask which is people's favorite.

Shared Worlds collect a range of media such as art, fiction, nonfiction about the setting, etc.  A shared world may exist primarily in a proprietary website like Torn World, which has archives of art, fiction, and poetry; articles describing the world; a character database; a forum for readers and contributors; and a LiveJournal community.  Some, however, take the form of a blog or other venue.  Cyberspace is a natural home for shared worlds because it's so flexible, it can host different types of content, and it facilitates easy communication among many people.  A shared world often has different levels of content available to the public, registered members, and donors.

Webcomics combine art and writing for more complex storytelling. They may be single-panel, strip, or serial in format.  Some also extend the writing into a larger block of text below the comic section, as in Alien Dice.  Webcomics often have a general donation button.  However, they are particularly prone to offering extra perks or competitions -- for instance, separate donation pools for three different characters, with the character who earns the most money appearing in a special wallpaper illustration.

Weblit spans all the many forms of literature online.  Choices include poetry, short stories, serialized novels, and webserials.  These may feature established settings and characters, or they may be one-shots.  Shared worldbuilding is also a feature of many weblit projects, especially the larger or longer-running ones.

Note that tastes can vary greatly between online and offline literature.  Poetry is considerably more popular in crowdfunding than in the mainstream.  The Poetry Fishbowl uses audience prompts to create poems, some of which belong to poetic series.  Also benefiting is fiction of the "gutter" lengths (roughly between 7,500 and 50,000 words) where magazines and book publishers rarely buy it, but online audiences do.  Similarly, fiction serials used to be popular, fell out of fashion for decades, and are now becoming successful online.  Serialized novels, which have a finite story arc, contrast with true serials which may continue indefinitely.  A good serialized novel is Diary of a Necromancer and K.A. Jones (LJ user kajones_writing) is currently running several series of short fiction.


Finally, useful categories appear in the way awards get organized.  The Rose & Bay Award recognizes excellence in cyberfunded creativity.  The 2011 Rose & Bay Awards covered six categories: Art, Fiction, Poetry, Webcomic, Other Project, and Patron.  As crowdfunding continues, other awards may emerge and those could divide projects along other lines, such as by genre or by length or by type of business model.  Watch for those and other trends as the practice of cyberfunded creativity grows over time.


This article originally appeared as a post on the Crowdfunding community in LiveJournal on 9/26/11.