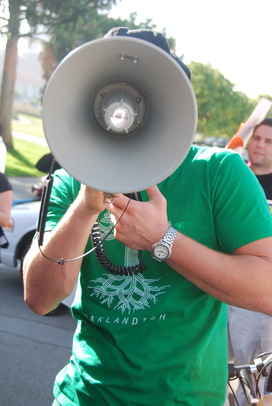 Crowdfunding depends on interaction between creators and patrons of crowdfunding.  While it's important to keep the "fund" part in mind, the "crowd" part is vital too.  It's the "crowd" that distinguishes this business model from a plain old store online.  This concerns multiple aspects including the individual viewers interacting with the creator(s) of a project, the community spirit generated by the audience as patrons and fans talk amongst themselves, and word-of-mouth advertising as people promote a project elsewhere.  Noncash support is useful for fans who are enthusiastic but short on funds, and for patrons who want to help with more than just money.  So let's explore some noncash ways in which people can support their favorite projects.

Feedback.  Creators in the crowdfunding business really like feedback.  If they didn't want audience interaction, they'd pick some other business model.  Check the individual project for details, because people's preferred modes of interaction do vary, but there will always be something because this is part of the core concept.  Comments on blogs and votes in polls are typical examples.  Look closely because some projects have interaction perks such as a free poem if a new person participates or an extra installment if the blog gains X new friends.

Linkbacks.  When you link to a project's landing page, current installment, etc. that helps drive traffic.  Online, eyeballs are worth serious money; people pay a lot and do all kinds of acrobatics just trying to get people to visit  their websites.  But hey, anybody with an audience can drive traffic; if you blog, that's you.  Your audience learns what you like in comparison to what they like, and will follow your links accordingly.  There are a number of folks who make a serious contribution to crowdfunding just by watching for cool projects and linking to them.  Some projects are starting to add perks for linkbacks, such as an extra round of revision on a sketch that gets the most linkbacks.

Reviews.  There is no single all-crowdfunding hub for reviewing projects, but there are communities on LiveJournal and on Dreamwidth where you can post reviews.  Also, there are form-specific hubs (such as Web Fiction Guide) that allow reviews.  A review tells people what project(s) you're supporting and why that's worth their attention.  Reviews are more detailed than a quick "read this" linkback; they may in fact link to multiple examples from a single project or compare and contrast different projects.  Thus, they are more powerful than simple linkbacks for driving traffic.

Interviews.  Like reviews, interviews may go into greater depth about a project, but they focus on a person -- often a creator, but patrons or other supporters can be interviewed too.  Questions may delve into one project or several, crowdfunding in general, s creator's work process, a patron's interest range, etc.  It's not hard to learn how to do interviews.  You may find some inspiration in my "Master List of Interview Questions for Writers."  You can post your interviews on your blog, on crowdfunding communities, or other appropriate venues.  Linking to offsite interviews that someone else has done is also helpful.

Prompts.  Many crowdfunding projects invite audience members to suggest ideas that may turn into art or literature.  Participating in these prompt calls is an excellent way to support crowdfunding.  Not sure what to suggest?  Look at the project page for ideas.  Sometimes there is a theme listed; if you get stuck, try plugging that theme into your favorite search engine to find relevant stuff that might spark ideas.  As a general rule, if you wait a little while, somebody else will start posting prompts so that you can see what kind of things this project usually gets.  Just mimic the style of prompts and change the details to suit your tastes.  Personal favorites are a good bet, such as your favorite color or character type.  Also, you can seriously put crowdfunding to work for you by requesting things that you really want, based on causes you support.  Do you want more positive portrayals of a marginalized group that you belong to?  Do you want to fix some of the stupid problems in mainstream entertainment, and replace them with something better?  Ask for it!  Prompt calls put a lot of control in your hands.  Use it.

Fanfic, fanart, etc.  This is a fun way to show support of projects if you have a bit of creativity yourself.  Draw one of the characters, write a tie-in scene, or otherwise play around in someone else's sandbox.  (Be polite and respectful when doing this; not everyone feels the same way about fan creations, and rudeness never helps.)  Some projects have a gallery of fanart, while others create a link list of tie-ins.

Collaborations.  Closely related to prompts and fan creations are full collaborations.  Some projects are really based on mass collaboration; others pick it up as they go along, or are started as a way to make room for it.  This can create a strongly flowing cycle of crowdfunding interaction.  For example, Torn World is a shared world that helps connect writers, artists, and patrons interested in this science fantasy setting.  Any combination of contributors can say, "Hey, would you like to team up and do something featuring X?"  Story Sketches is based on collaboration between an artist and various writers.  The pictures are fun for current fans of the writing, and can direct new fans there; and the writers can pipe their audiences to the art, allowing new people to see it too.

Corrections. Tied to feedback, corrections are an especially noteworthy subset of audience interaction. Remember, in crowdfunding, YOU are the editor. Unless the project raises enough to hire a proofreader (as is sometimes done before making a paper edition), it's up to the fans to spot any errors that slip past the creator. This includes such things as typos in literature or missing details in art. If you have any professional experience -- say, if you're a secretary, proofreader, art teacher, topical expert, etc. -- then your input may be exceptionally valuable. Again, check the project details because some creators really welcome error-checking by fans while others hate it.

Promotion on outside services.  This relates to linkbacks, reviews, and various other things.  Everyone has certain online services they frequent, such as LiveJournal or Facebook, and others they don't.  If you promote a crowdfunded project on a service where the creator doesn't have an account, then you open up a whole new audience pool.  This is especially effective in places like Twitter that make forwarding very easy, because one signal can get boosted far and wide if other folks like it.  The more of this you do, the more people may find and support the project, which means your favorite creators not only get more attention (and perhaps donations) but also don't need to spend as much time on self-promotion.  That may give them more resources for creating the goodies you're enjoying.

Sequential updates.  This ties into linkbacks and other newsy stuff.  Promoting a project once is nice; promoting it regularly is made of 100% gold-plated WIN.  This is most valuable for ongoing projects that happen weekly, monthly, or sporadically.  Updates of major news for daily or several-times-weekly projects, such as when they finish a story arc or are printing a volume, also come in very handy.  This activity lets your readers know that you really support a project over the long term.  Also, advertising research shows that repeated references get people's attention.  Someone may ignore the first three or four mentions of a project, but eventually get hooked anyhow, especially if you post teasers.

Direct referrals to people active in crowdfunding patronage or support.  Suppose you're broke, but you know a few people who aren't broke and who like crowdfunding.  Learn what those friends like.  Then you can tell them about particular projects that you think might appeal to them.  If they fall in love with any of those projects and donate, you've made a difference; it doesn't matter that the money didn't come out of your own personal pocket.  This is basically a more refined version of other word-of-mouth advertising options, but if you're thoughtful about applying it, then it can give a lot of results for very little effort.  Similarly, such tips are beneficial if you know people doing certain types of noncash support, such as linkers, reviewers, interviewers, etc.  They need stuff to pitch; you can help them find it.


This article began as a post over on the LiveJournal community Crowdfunding. on 7/31/11.