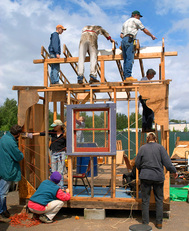 Now that we've covered the underlying structure of a series, let's explore what grows out of that.  These are the smaller parts of structure reaching up toward the surface of what the reader sees.  They include basic literary concepts such as character, setting, and theme.  What distinguishes serial work from stand-alone work is repetition.  A series revisits something.  What it revisits is up to the creator.  Serial literature typically features recurring characters and/or settings.  Another thing crucial to series cohesion is tembre -- the distinctive quality of the series as a whole, spanning aspects such as theme, mood, and authorial voice.

Characters give the audience someone to relate with.  A story needs at least one protagonist: a character who makes decisions that influence what happens next.  The antagonist is anyone or anything that gets in the protagonist's way: another person with opposing goals, a personal flaw within the protagonist, an environmental or social force, etc.  A series frequently introduces these elements with a brief sketch of their qualities, and then elaborates on those qualities as the conflict unfolds and intensifies.  So it's important to pick things with a lot of room to grow and tussle.

Begin by considering the protagonist(s).  This is most often a hero, though not always, and there are many different types.  This character's personality and skills determine what kind of plot will be engaging and what kind of antagonist is likely to feature.  A series may begin with one protagonist and collect others as the story progresses.  Also ask the question: who gets to star?  Privileged group members get to be heroes far more often.  A series about a marginalized character may attract an audience from that demographic, may have less competition, and may have more literary impact just because there's not much else like it available.  This is particularly relevant in poetry, itself a marginalized form, because people often think "Nobody like me writes/reads poetry.  It never talks about my kind of experience."  If you can prove that wrong, the reader frequently gets hooked.

Conversely, consider the antagonist.  This can be a person, but could be something else.  The three basics are person vs. person, person vs. self, and person vs. environment.  A strong story always matches the protagonist and antagonist in a relevant, meaningful conflict.  A story may have one antagonist, a group, or a chain.  Serial literature is particularly well suited to working through multiple antagonists, such as the layers of a criminal organization ultimately intending to take out the boss.  It also helps to have an antagonist that the audience loves to hate.  This might be a beautiful, deadly alien planet or a brilliant, ruthless villain.  Note that this type of antagonist tends to combine both positive and negative qualities.  Poetry offers some extremely subtle tools for this, such as using assonance and alliteration to affect the aesthetics of a villain's voice or word choice to make one sound erudite or scurrilous.  Readers will stick around because they want to see the villain Come To A Bad End.  I firmly believe that there are no overpowered protagonists, just underpowered antagonists.  Therefore, the more formidable the antagonist, the more awesome the protagonist can be -- and will have to be, in order to win.

Along with characters, a story needs somewhere to happen.  See some examples on my Serial Poetry page, or browse the setting Quiar that I designed for a friend.  The setting might be small (a house and its neighborhood, as in Monster House), medium (a village, as in Fiorenza the Wisewoman), large (a continent, as in The Ocracies) or even infinite (the whole manifold of universes, as in Schrodinger's Heroes).  One interesting way of sorting series is by location: stationary vs. mobile.  A stationary series keeps the characters in one place which they rarely if ever leave.  Most or all of the action happens there, developing one setting in great depth and detail.  Monster House has a very small footprint in this regard.  A mobile series keeps the characters moving through new settings, although they may stay within a larger boundary such as a nation.  This maximizes the potential to explore different places in great breadth, but not as much detail.  The Origami Mage has a large footprint because the rivals are chasing each other.  In between, the characters may have a "home base" but leave it often for action in other places, or they may have a "hub" that brings all different kinds of action right to them and might change with the changing circumstances.  Schrodinger's Heroes does this, because the Teflon Tesseract provides a base of operation -- but it can change, it can bring adventure from elsewhere, and it can throw the characters clear across the manifold.  In a rhyming poem, it's especially important to note whether the name of the setting and the objects within it will rhyme and scan easily.  If they don't, that becomes a handicap.

Tembre is the mortar that holds the pieces of the series together.  Even when broken into segments that each have a different focus, a series should retain a unifying vision that distinguishes it from other material.  Aspects of this may include theme, mood, and voice.  A theme is the main idea of a story, and a thesis is the message or what the story says about  the theme.  A story can have multiple themes; a series is particularly prone to weaving together several subplots, each with its own main idea.  For instance, Path of the Paladins deals with issues of Faith, Perseverence, and Recovery among others.

Mood relates to the emotional resonance of a series.  This is another place where poetry can easily outshine fiction, because poetry evokes strong feelings and it doesn't bear as much expectation of action.  There can be whole poems worth of introspection about the mood(s) of a series.  Some series have a consistent mood while others vary more.  The Origami Mage has a particularly Zen flavor of equanimity even in the fight scenes.  Monster House is mostly lighthearted weirdness with wry humor, but occasionally makes a sharp turn into downright creepy.  Authors need to consider whether varying the mood will add interest or throw readers off the track.

Voice spans how the author narrates and how the characters speak, the management of word choice and phrasing to create a consistent sound throughout the series.  Readers may pay more attention to sound in poetry than in fiction because poetry is full of audio techniques such as rhyme and alliteration.  Voice holds many clues about culture, gender, education, time period, genre, and other aspects of a series.  I happen to enjoy great diversity in my writing, so my series span many different cultures and times; I try to include as many concrete details as possible.  So for instance, The Steamsmith uses Victorian idioms and is spellchecked for British English; Kande's Quest draws on African lore and language; P.I.E. is contemporary American with a nod to detective and paranormal genres.

Finally, consider a concept that can appear anywhere in entertainment but is most prevalent in serial work due to the longer timeframe and depth of development: breakout characters and concepts.  These start out as supporting elements and then become major touchstones, or even steal the show because they are so awesome.  Most often this phenomenon involves characters; for instance, the Sheriff of Nottingham in Robin Hood: Prince of Thieves.  He is so deliciously wicked!  However, a similar effect occurs when objects or places take on iconic significance.  For example, think about the Batmobile; it's not just a conveyance, it's almost a character in its own right.

A breakout character, then, can be anyone or anything that comes to embody the spirit of a series enough that the audience clamors for more of it.  This is a feature, not a bug.  It may not have been something originally intended, but it grew out of the creator's initial ideas and took on a life of its own.  So work with it.  That's especially true in crowdfunding, where the audience contributes to the inspiration, the character development, the story direction, and -- most crucially -- what recurs over time.  Audience influence tends to determine which supporting characters or concepts become regulars.  In poetry, a particular technique or poetic form may become an important part of the series; be prepared to accommodate that if it happens.  Serial authors are well advised to watch for audience interest and follow it as far as feasible.

What part of the infrastructure do you like best?
What usually hooks you into a series -- character, setting, plot, or something else?
What are some other infrastructure aspects of poetry?

Companion Poem: "A Hole in the Blanket"

"A Hole in the Blanket" began with my post about "Always Chaotic Evil" races in fantasy, which led to LiveJournal user marina_bonomi's thoughtful discussion post.  Together we came up with the core ideas for this piece of "sword and soul."

Basically, I looked at some standard tropes and decided that they were stupid, limiting, and boring; and that doing something different would be fun.  So the dark-aspected "evil" and light-aspected "good" imagery is reversed, with the location in a fantasy-Africa instead of a fantasy-Europe.  The objects of power, plot dynamics, problem-solving approaches, beauty standards, voice, etc. all derive from African perspectives, mainly Akan.  In terms of poetic techniques, look for repetition, mythic imagery, and strong cadence -- all features typical of African poetry.  Africa has a very strong oral tradition.

The Archetypal Characters: Protagonist and Antagonist

The Hero with a Thousand Faces

How Setting Affects the Story

A Smart Dose of Antagonist Force

Types of Antagonist: The Six Types of Literary Conflict

Writing Literature with Sense of Time and Place


This article was originally posted to the Poetree community on 10/25/12.